Brrrr...the Beast from the East (wintery blasts from Siberia) has arrived and we’re really feeling the chill. Walking to school in below zero temps – even before you lower it further for the ‘wind chill’ factor – has been bracing to say the least. But we’re made of sturdy stuff and have wrapped up warm and made it to school on time every day.

It has meant that we needed to wear layers of clothes under the costumes to celebrate World Book Day this year. We had a good time thinking about our favourite characters before making home-made costumes combined with a few ebay bargains and funny face paint.

Seamus embraced the Gruffalo with much enthusiasm, Orla decided to be a character from 101 Dalmatians and Aoife went as Katniss Everdeen from the Hunger Games; a book she hasn’t read, made into a film she’s not allowed to see! Thankfully they chose warm and cosy costumes. All looked great and had lots of fun with book related activities at their schools. It is always amusing to see Harry Potter or The Cat in the Hat on the way to school in the morning. However, for many the day was cut short with parents collecting them from school early due to worsening weather conditions. 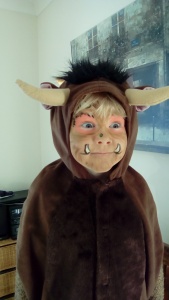 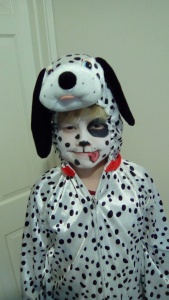 Not to be outdone with the costumes, there was even a little competition at Baby Sensory. Sadly some of the classes had to be cancelled due to the weather, so I didn’t get to see baby Hungry Caterpillars and Sleeping Beauties but those who posted photos so far look great. I was Mr Tickle (as a result of having a leftover costume Aoife and Orla refused to wear) and the Baby Sensory dolly was Mr Strong, however on reflection I should have made him Mr Small. Next year guys, next year …. 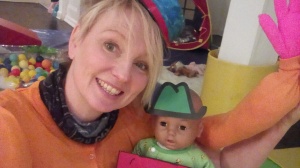 Back to the cold weather … Orla really faced it when she took part in the Primary School Cross Country. She joined nearly 900 children (divided into their different year groups) on a bitterly cold Saturday morning to run her 1.5km. Go Orla!

The next day Aoife attended the Thanet Music, Drama and Dance Festival. She was fantastic and despite having chronic ear ache, she delivered her part well and received brilliant feedback. Her school won their category and achieved a distinction. Aoife plays the part of the school teacher in a musical drama set in the 1940s. The drama group gave a really impressive performance and looked spectacular in their costumes They will be performing in local care homes later this year, which I am sure will go down a treat. 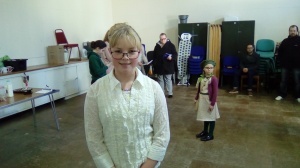 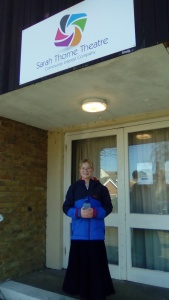 We’ve been involved in more arty stuff which has been going on locally, attending AIR (Arts In Ramsgate), where we are making our Mad Hatters’ hats ready for the Easter Parade. The parade will be on 1st April and has an Alice in Wonderland theme. The hats are coming along nicely but have taken some time as they have had to be completely made from scratch, cutting cardboard, shaping and sticking. I am sure they’ll look even more impressive when they are decorated. 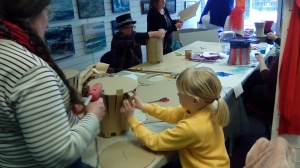 Time for something tasty – We celebrated Shrove Tuesday (well, Shrove Saturday) in style and had an evening of great fun at a pancake party held at the local church hall. Sadly Aoife wasn’t well enough to join us, but Orla and Seamus made sure they enjoyed her share of the pancakes on her behalf!  Seamus loved the pancake flipping challenge … is 4 a new world record?! We had fun playing the Beetle Drive, enjoyed a sing-a-long and had lovely home-made soup before topping our pancakes with a choice of strawberries, chocolate sauce, bananas, cream, marshmallows, golden syrup or lemon and sugar. Thank you to those who organise it and to our friends who joined us and were such good company. 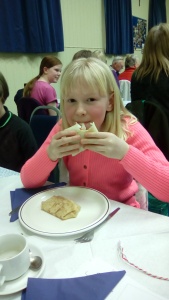 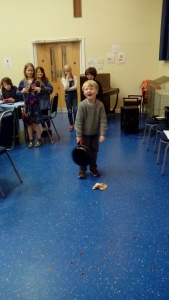 So despite the weather, and many things we were looking forward to being cancelled or postponed, we’ve still been busy and had some giggles, and enjoyed a hot chocolate or two to keep us cosy and warm. We’ve not been beaten by the Beast from the East, we’ve had some fun in the snow but roll on spring … we ready to thaw out now!

We are Caroline and Ian. We recently undertook an adventure, packing up everything and travelling with our three children. Our blog started as a way of capturing our memories of the preparation and interesting aspects of our journey. After a twist of fate, we're back in the UK much sooner than expected so who knows what's next for us now we're back home with our three kids in tow!