Wow, the year is whizzing by. Half term arrived again. It started in typical fashion – with a storm, heavy rain and thunder and lightning, but that cleared after about 30 minutes to bring glorious sunshine and scorching temperatures. Seamus loved splashing and singing in the rain while it lasted, even if he was still in his pyjamas!

So when the blue skies returned and the temperature soared, we were needed at the allotment. We answered Ian’s call in style, marching into the allotment singing Hi-Ho, like the seven dwarfs going to work … albeit slightly fewer in number.  It was all hands on deck to help cover Ian’s poly-tunnel. It’s so large we are considering naming it The O’Sullivan O2! Once the doors are on, it will be great for the tomatoes. I felt like I lost a few pounds being inside it as we fixed the plastic, it was unbearably sauna-like in there! To say Ian’s happy that it is one step closer to completion would be an understatement. 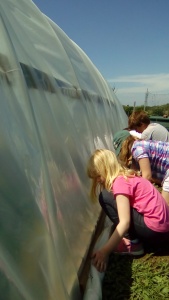 But the holidays are not all work, work, work.  Italy may have the fantastic Mille Miglia, but as we are UK based, we headed to Margate to see super scooters. Last year we had to wear woolly hats and scarves but this year it was sun-cream, t-shirts and shorts. Viva la Vespa! 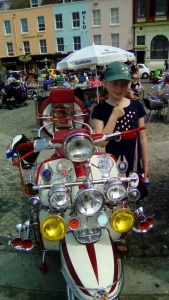 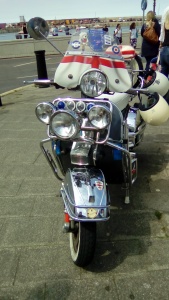 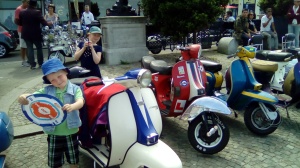 We have been joined by another child this half term, so the three kids in tow blog needs to be temporarily renamed and renumbered to four (not counting our langauge students who live with us each week).  I took all four kids to enjoy the wonderful music at Broadstairs Bandstand. This Sunday, the band was Goosebumps, who were really good. The bandstand is a perfect spot for chilling with an ice lolly or cup of tea. We often go with a home made picnic. We are so fortunate to have a choice of lovely places and free events to take everyone. Our half term ‘staycation’ is well and truly within budget so far. 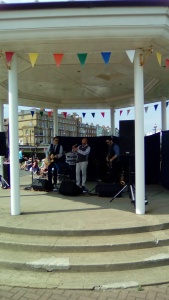 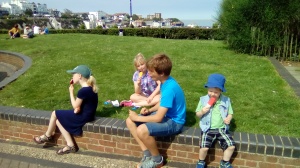 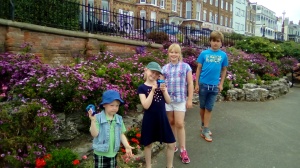 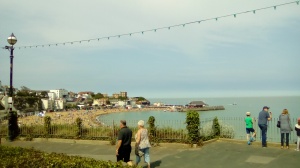 Everything is better is cake though. We popped in to support The Four Candles (one of the local micropubs) charity cake sale and ate them at the St Peter’s Dickens Mosaic opposite. It is Britain’s smallest brewpub, so it was quite a squeeze to get in to choose what we were going to buy and sitting at the mosaic gave us much more elbow room. The Victoria sponge got the biggest thumbs up, but my vote went to the chocolate beetroot cake, which was yummier than it sounds. We hope they managed to raise a good amount for the fantastic Macmillan charity. 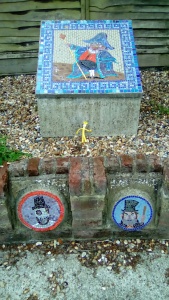 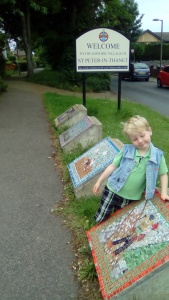 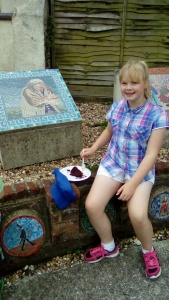 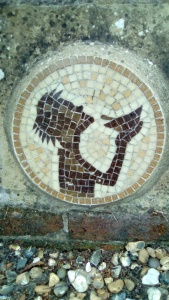 The mosaic is lovely, depicting characters such as Oliver Twist, Ebeneezer Scrooge and Mr Bumble. There is even Bullseye, Bill Sykes’ dog.  Soon it will be Broadstairs’ Dickens Week, so we will be surrounded by Dickens characters and Victorian costumes around the town non stop, so this was a good way to get us in the mood.

This bank holiday Monday, we spent time in Ramsgate to see the Spring Spectacular which featured bi-plane aerobatics and a display from a Mark 16 Hurricane and the “Spirit of Kent” Spitfire. Naturally, the kids only had eyes for the fun fair, which was extremely loud and more than just a bit grubby – especially in the kiddies fun house. It was quite tricky to see the cycle show due to the number of people crowded round, so sadly we missed most of the stunts and tricks as I couldn’t get the kids near enough to see very much.  All in all, what should have been a lovely day out, was much more expensive than planned (I didn’t know the fun fair was going to be there) and although I enjoyed them, the attractions/displays we went especially to see left the kids a bit underwhelmed and moany… always a good recipe for the bus ride home. 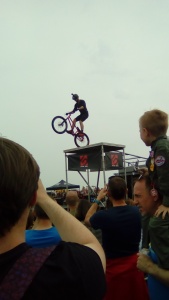 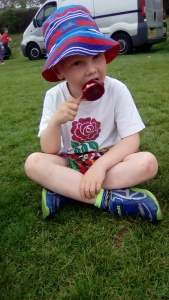 However, it was particularly lovely to walk back via the harbour, which looked wonderful. We took time to pop into the Sailors Church too. The Sailors’ Church and Harbour Mission was built in 1878 by Eustace Brenan. He saw the need for spiritual guidance and physical help for the men and boys who made up the crews of the sailing smacks who fished out of Ramsgate. It was dangerous, arduous work, especially for the young apprentices who were called Smack Boys. When the apprentices were ashore, they were provided with some comfort in the rooms above the church and later, in the Smack Boys Home next door. It is a small church, but quite interesting and regularly holds services inviting everyone to attend. 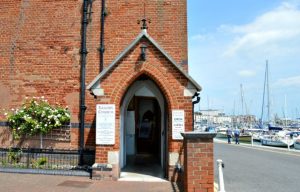 Broadstairs really looks wonderful in the summer – day trippers, language students and locals all enjoying the beach and more. I didn’t take the photo below, but it shows the promenade off in all its glory.  Soon we will have fireworks in the evening to look forward to. Always lovely, especially when they combine it with music at the bandstand during July and August.

There are some lovely things to see in Broadstairs, some little hidden gems in places too. 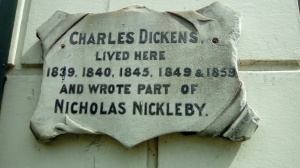 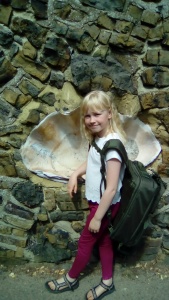 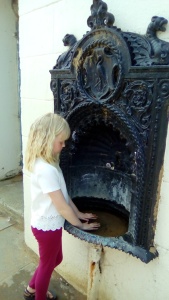 One way to get to know our area better was to try the Explorer’s Pack which is avaible to hire in Margate, Broadstairs and Ramsgate. #coastalexplorers. The waterproof backpack can be hired for £5 and contains activity cards and equipment to help discover the natural environment and local heritage. There are marine identifaction guides, compasses and a trail map showing where you do activities such as ‘art on the beach’, ‘seaweed and shell search’, ‘write a postcard’, ‘play hopscotch’ and learn about the weather and clouds. We learned how to make a sundial in the sand, how to spot whether the tide was in or out. Cards give information about the area and its history, encouraging kids to spot clues and make stories. Seamus loved the binoculars, Orla liked the mini microscope and net. It was a different way to get to know our beach. #coastalexplorers. We hired ours from Lillyput Minigolf, but Ramsgate and Margate packs are available from their visitor centres. 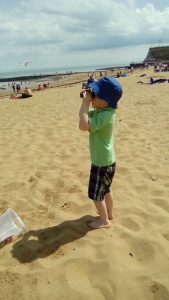 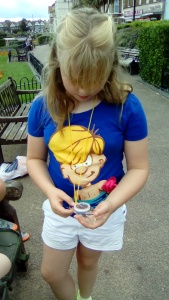 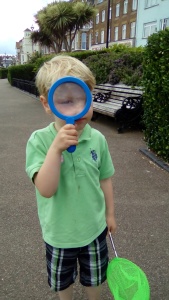 As all seaside towns, we have the amusement arcades. The kids love to visit and play on the 2p machines. I honestly think they like the machine which converts the change as much as the actual amusements! A few ‘lucky’ wins, a lot of 2ps inserted randomly resulting in noise and flashing lights, we were then able to trade our tickets for two key fobs and a badge! Of course, the kids were delighted and think this represents a grand haul in recognition of their skills. 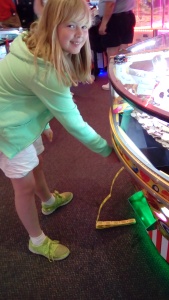 The following day, we had beautiful sunshine again while we played mini golf at Lillyput Crazy Golf. The grounds looked lovely with flowers in bloom. Admittedly, there was a wee bit of cheating going on at times (I said I wouldn’t mention any names, didn’t I Seamus?!) but everyone seemed to enjoy it. 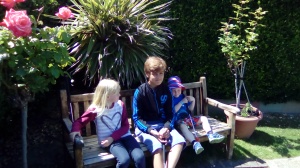 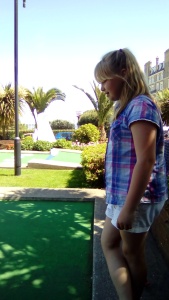 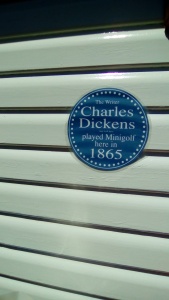 Pierremont Park has been a lovely little oasis for us, sitting under the trees for shade. It’s a perfect spot to eat our chips or sandwiches and close enough to pop to the Co-op for some refreshing ice lollies. We made a couple of trips there this half term. At lunchtimes, it fills with students from the local language schools, gathering together to chat and share pizza and giggles, but is equally used by families and those wanting to spend a few moments reading their book. I was lucky enough to pick up a book left on the seat, inside was inscribed that it was free and to be passed on … I may drop a few around town myself to keep the spirit of sharing going.

Back in the house, the first of the broadbeans have been harvested and eaten. Seamus and Orla did a good job of preparing them for dinner soon after they were picked. As you can see, the usual pose of sitting on the kitchen floor has been resumed! 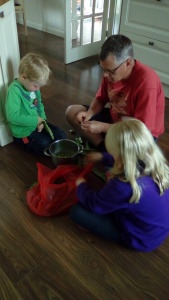 And finally, as the week draws to a close, preparation is well underway for Ian (Daddy’s) birthday. The kids have been painting the box for his gift. Best not say too much more incase he reads this! Fingers crossed, we hope he likes it. That reminds me, we need to pop to the shop to buy a few more candles!! 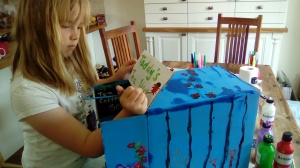 All in all, we have been extremely fortunate to have had such lovely weather this half term. As usual, there has been lots of things to do in Thanet for children. The countdown for school has begun as I start to put the PE kits in their bags and dig out the shoe polish. School on Monday – phew, I’ll be glad for a wee rest!

We are Caroline and Ian. We recently undertook an adventure, packing up everything and travelling with our three children. Our blog started as a way of capturing our memories of the preparation and interesting aspects of our journey. After a twist of fate, we're back in the UK much sooner than expected so who knows what's next for us now we're back home with our three kids in tow!